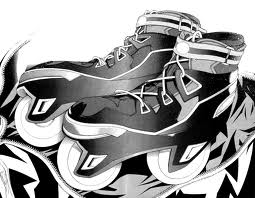 Air Treks (also spelt Air Treks) or A-Ts are high tech motorized inline skates that were originally designed as a revolutionary new propulsion system that combined efficent energy circuits and an energy recovering system. This technology was not designed with inline skating in mind. They were first used by the Gravity Children to help bring out thier full potential. It would be many years until Air Treks became accessible to the general public as inline skates.

Air Treks can be generalized as "high-end, customizable, motorized inline skates". They are composed of three major components: Wheel Motor, Hydraulic Cushion System, and Power Injection System. A Braking System is incorporated with most, equipped with a power-lock switch built on the outer sole of the skates. This overrides the acceleration system and enable Air Treks to operate as normal inline skates as well. However most Riders (Air Treck users) use a Spin-Turn Stop technique, instead of a regular deceleration system to come to rest. However, the speed of Air Treks are generated proportional to the power of the user's leg; the assist motor accelerates based on the force of a kick. Air Treks are simply 'self-propelled shoes equipped with powerful suspension, air cushion systems, and ultra small motors in the wheels'. Each pair comes installed with a special memory stick which connects to "Inorganic Net", a cyber world which allows riders to fight against other riders virtually. A-T's also come installed with a program called R.E.A.D. which also connects to the "Inorganic Net" and can allow the rider to access performance date on another rider from the data stored on the memory cared inserted inside the A-T. Generally, Air Treks are very expensive (running normally ¥100,000 a pair), requiring regular maintenance and tuning. Luckily, Storm Rider team Tool Toul To provides free maintenance and repair and are generally a more preferable way to keep A-T's in working condition.

The biggest "thrill" of Air Treks is the precisely calibrated air cushion system, which gives these self-propelled trick skates their juice, allowing the Riders to "fly". This aspect is the major theme of the Air Gear story.

Air Treks are fully customizable in every aspect, from the skate's design, to the wheels, and even down to the screws. By combining various parts, one can truly make their own unique Air Treks. Most standard-issue parts are available at sporting goods stores, but the rare parts must be purchased at speciality shops (such as Glam Slum, which comes to Tokyo every once in a while), which tend to be hidden or always on the road. In addition, special parts known as Regalia which are a necessity to King and Queen level riders who's riding would surpass the quality of normal A-T's can be made by Tool Toul To upon request. While on the subject, Kings and Queens (or  Keepers in the official english release of Air Gear) are often assigned a

link tuner to help not only with A-T repairs, but also tune the King or Queen in question to get up to date info on the rider and make sure that the rider, his/her A-T's and Regalia if they have one are in top condition.

Rider team members often have identically customized ATs. The standard Air Treck has two wheels, but it is also possible for 3 or 4 wheels on each Air Treck as seen with Buccha's 4 wheeled A-T's, and even using spheres and blocks instead of wheels. A notable specific customization is of The Eight Kings of the Road, they all have specialized Trecks known as 'Regalia' which are the mark of each King and Queen

Being customizable, many skaters have customized their own Air Treks to suit their own style; changing with various combinations of parts, even screws and/or readjusting the balance, altering the speed and performance of their Air Treks tremendously but now Air Treck companies have speed limiters which slow down the speed of the ATs considerably, however people can to go to illegal AT shops such as the Grand Slum to break the limiters

Community content is available under CC-BY-SA unless otherwise noted.
Advertisement