Parts War is a battle between Storm Riders to gain AT parts, emblems, territories or Regalia. They also compete in these battles to advance their team to a higher rank. A team has to bet something in order to battle. Teams will usually bet parts, thus the name Parts War, or a team can bet their emblem. If a team bets their emblem and loses, that team must disband.

Parts War actually began as a website where riders simply traded parts with other riders. Someone later developed the website into a tournament. The person who created of the current Parts War system is unknown, even to Sora Takeuchi and his brother, Nike.

There are two different ways to rank up and climb your way to the top of the ranks with your team:

To start a Parts War with another Team there are 3 different ways:

(Note: In Parts War, the challenging team is at a disadvantage since they have to fight on the enemy's home turf. The opposing team has full knowledge of the battle arena and is the only one who can set the rules and the game.) Within a Parts War many things can be won or lost. Some things people bet in a Parts War are Emblems, Territory, Money or Parts and also people sometimes just do Parts Wars for fun or to meet new people/acquire a team. Teams must be careful in the Parts War though for if a Team bets their Emblem and loses it's an instant disband for the Team.

For a disbanded Team have a few choices:

Also Teams must whom lose 3 consecutive Parts War races/events will also rank down in class if they're higher than F-Class. All battles must be reported to the Parts War Forums, for them to count as a victory for the Team/Rider to Rank up. Also Video Recording or taking pictures of your Parts War is highly recommended so that new Members and Teams can see how the Parts War works.

There are six classes in the Parts War, ranking from F to A, with a different competition for each rank. These competitions are Dash, Hurdle, Cube, Air, Disk and Balloon.

A team can advance in rank by winning three times in a row against opponents of their own class, or winning once against an opponent of higher class.

Some teams are noted to specialize in certain classes or on certain battlefields. For example, Behemoth and Jiggy specialize in D-Class Cube matches, and Sleeping Forest (Ringo in particular) is significantly more powerful inside the shaft of the Trophaeum

The pyramid of Parts War classes. 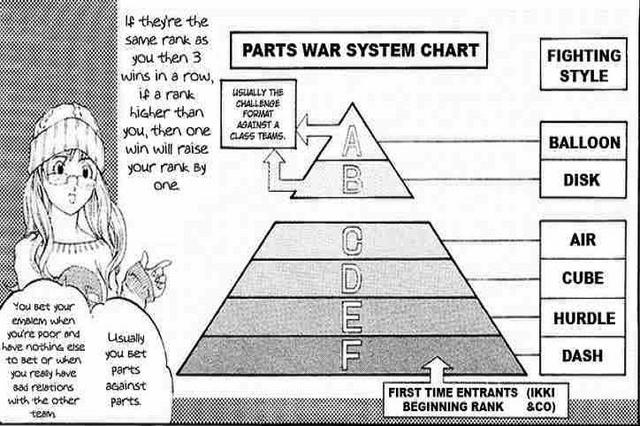 These classes teach new riders basic movements for them to learn AT's. Although these classes are considered basic, even high-level Storm Riders participate in them frequently.

Movement taught - "Run". Dash is a simple race to a finish line; the person to get there first wins the battle. Dash matches are carried out in a series of one-on-one races, meaning even 2 opposing Storm Riders could engage in a function Dash match (as seen in the battle between Ikki and Ringo).

Movement taught - "Avoid Obstacles". Hurdle incorporates the same concepts present in F-Class Dash matches, meaning one simply has to reach the finish line to win. However, to make things more difficult, large obstacles such as buildings or wide gaps are added to require more skilled AT usage. Storm Riders do not have to go over the obstacles in their way, they are able to go through, round or over. This is shown in the battle between Ikki and Buccha where Ikki smashes through a school window to pass through the building and eventually win the race.

Movement taught - "Manage to Use Wall Surfaces". The focus in the majority of Cube matches is one-on-one combat within an enclosed space. However, some battlefields may allow for larger scale combat, as seen during Kogarasumaru's match against Behemoth.

Movement taught - "Jump". Air consists of ten platforms, each with a specific number. After a certain amount of time set at the start of the battle, these platforms are successively knocked down in random order. This means that riders must fight against the other team in order to gain solid footing. The last team standing wins the match. Two arenas for Air battles have been seen: the Animal House battle used a "Chupa Chups" arena, in which the platforms were themed after different types of candy. Against Sleipnir, jet airplanes were used, greatly adding to the difficulty and danger of the match.You may see this in one of the gramscale fights of IKKI's team.

A team needs to win against B-Class to Special A-Class to enter the Advanced Class.

Disk has two different decisive factors. The first is limit to attack. The person with the disk is called the 'disk keeper', and can attack anyone at will. The others cannot attack anyone else besides the disk keeper. If anyone breaks this rule, a penalty point is given to the other team. The second most important factor in this class is teamwork. If a team does not co-operate, they definitely will not win.

The highest ranked, and hardest, battle system utilizing the 6 layers between A and F. Whoever takes the balloon with the emblem wins. The rules may look simple, but the difficulty is extremely high. A balloon battle is where both teams must access their full potential both mentally and physically. Every single one of their accumlating strengths and skills is a decisive factor to victory. Balloon is a team game usually carried out in 5-to-5 teams (although 6-to-6 has also been seen), where each team is separated into positions:

Each position has fatal risks. The Panther must not reveal itself otherwise it will be the opponents' primary target. The Decoy must pretend to be the Panther, giving the real Panther an opportunity, but risking his or her own life in the process. The Ultimate must fight the opponents hand-to-hand. The Middle assists the attacks causing him or her to share the Ultimate's risks. The Keeper stops the attacks, sometimes blocking the enemies attacks with his/her body.

(Note: Remember that the balloon does not remain stationery. Outside factors such as wind or wildlife can affect the balloon's flight path.)

Sleeping Forest vs The Skull Saders

Ikki and Sora (with his dogs) vs The Noyamano Sisters

Retrieved from "https://air-gear-fanon.fandom.com/wiki/Parts_War?oldid=4180"
Community content is available under CC-BY-SA unless otherwise noted.