Zain is brother of the older brother of Kait the Jungle King. Zain have died during a race for the title of Flame King.

Zain has a tattoo on his left bicep is on top is the "ASCE" with the "S" crossed out. Sometimes he wears a yellow shirt open side of his dark blue bag to. He wore black boots, black shorts at the time of the knee with a studded belt orange eyes, and a blue pouch belted around his left leg. He also wore one second short belt with a big red "A".

Zain is a powerfull user of the Flame Road. The riders of this road move at extremely high speeds, often disappearing from view. The high friction of the movement on a surface causes enough heat to create the illusion of a flaming trail. The Flame Road is similar to the Wing Road in that both Wind and Fire are said to be "free".

The name of the Zain A-Ts is King Flame. The A-Ts is similar to the Flame Regalia having an equal appearance without owning the core 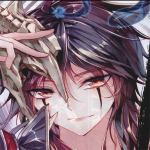